Blink and you’ll miss it. In a span of 2 minutes and 32 seconds, Team Cherry opened the floodgates early at the 2018 Top Prospects Game in Guelph en route to an eventual 7-4 victory.

Seeing a trio of two-goal efforts – courtesy of Aidan Dudas of the Owen Sound Attack, Ty Dellandrea of the Flint Firebirds, and Filip Zadina of the Halifax Mooseheads – there was no shortage of scoring from Team Cherry in a night that saw offensive outbursts rewrite the event record book.

Beginning with Dellandrea, a quick scoring succession of two tallies in 20 seconds marked the fastest pair of goals by one player in showcase history, shattering the previous mark of 3:22 set by J.P. Dumont of the Val-d’Or Foreurs 22 years earlier. Adding to the effort, Dellandrea’s scoring binge followed Dudas’ first goal of the game to mark the fastest three goals by one team in history as Team Cherry lit the lamp three times in just 67 seconds, besting the previous record of 2:12 set seven years prior.

En route to victory, Team Cherry received strong scoring support throughout its lineup, particularly on the back end where London Knights rearguard and Player of the Game Evan Bouchard also impressed in wrapping up the night with four helpers to etch his name in the event record book in tying for the most assists and most points by a single player. With the achievement, Bouchard became just the second player to do so following Daniel Briere of the Drummondville Voltigeurs in 1996.

For Team Orr, who were led by former NHL superstar and OHL graduate Eric Lindros, the squad saw its offense come from four different skaters including blue-liner Kevin Bahl of the Ottawa 67’s who also added an assist to earn Player of the Game recognition for his side.

In all, the offensive acumen displayed at the 2018 Top Prospects Game brought to the national stage the next wave of budding talents to hit the pro ranks with 35 event participants later chosen in the 2018 NHL Draft including 11 first rounders like Zadina (6th overall), Bouchard (10th overall) and Dellandrea (13th overall) but headlined by Andrei Svechnikov (2nd overall) of the Barrie Colts who is already turning into one of the NHL’s young rising stars.

Of note, Alexander Alexeyev (Red Deer Rebels) was originally invited to compete in the event but was unable to participate and would be selected 31st overall by the Washington Capitals. 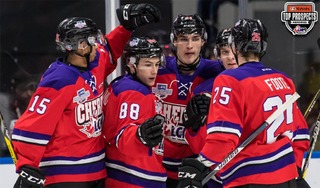