Ron MacLean ready for his return to Red Deer 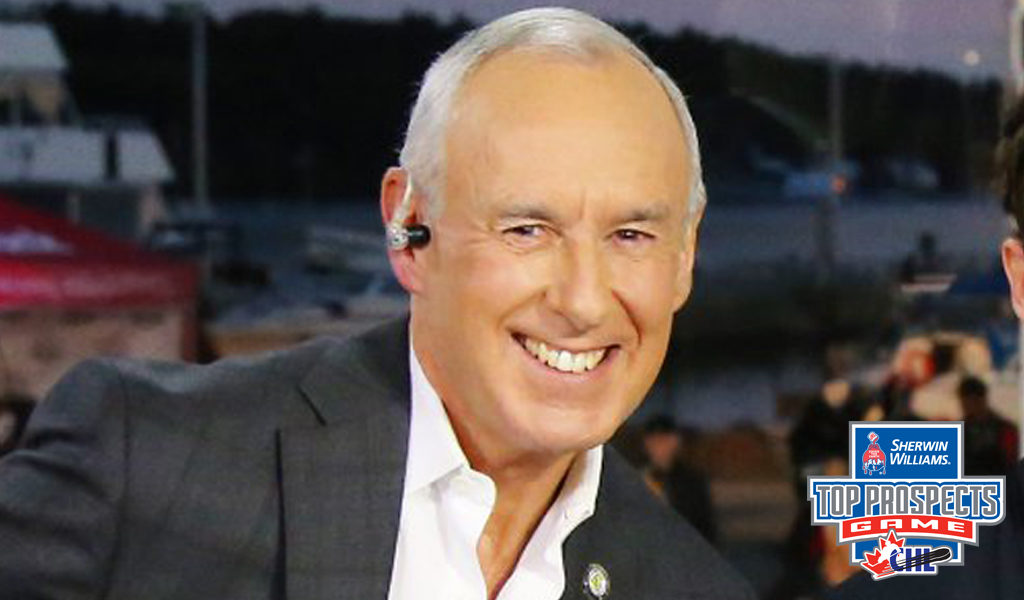 Hockey and hosting are synonymous with Ron MacLean, however the 2019 Sherwin-Williams CHL/NHL Top Prospects Game will see the legendary Hockey Night in Canada broadcaster move from behind the panel to behind the bench.

A native of Red Deer, Alta. – the host city of this year’s prospect showcase – MacLean will coach Team Cherry and be the guiding voice to top up-and-comers like Vancouver Giants defenseman Bowen Byram, Lethbridge Hurricanes forward Dylan Cozens, and Halifax Mooseheads centre Raphael Lavoie, among others.

It’s also an opportunity for MacLean to share the message of Don Cherry, his longtime friend and co-host. Of course, in the lead up to the Jan. 23 contest, there’s been no shortage of advice from the former Boston Bruins coach on what MacLean should expect when he steps behind the bench.

“Don said, ‘You’ll be nervous’, and I know that I will be,” MacLean told the Canadian Hockey League. “I’m glad I’ll know a couple of people at the game. I watched the Hlinka Gretzky Cup and was just so amazed by some of the work of the players who will be in this game.”

As for Cherry, the fervent junior hockey advocate is considered a builder of the top prospect event and that aspect isn’t lost on MacLean.

“I will feel really honoured to represent Don and to tell the kids some stories,” MacLean said. “Because he coached Bobby Orr, and because his best friends are Bobby Orr and Brian Kilrea, you can imagine the stories and the hints of success that Don can offer.

“They’re usually the finest details, like Bobby Orr used to cut one-sixteenth of an inch off the butt-end of his hockey stick, he’d tape his stick with one wrap of tape, and he’d wear no socks. Every element of Bobby’s approach to his gear was an indication of what he’d be like when he played, so it’s the little things, and Don taught me that early on.”

MacLean and Hrudey at the helm on January 23 for showcase of #CHL’s top #NHLDraft prospects.

This year’s game marks MacLean’s initial involvement and the chance to do so in his hometown undoubtedly serves as added intrigue. A mid-sized city, Red Deer continues to punch above its weight class in bringing in big-time events – not only the prospect showcase, but also the upcoming 2019 Canada Winter Games as well as the 2021 IIHF World Junior Hockey Championship.

For MacLean, there’s one name that has helped shape the message about what this historic hockey city is all about.

“There’s the Sutters for you. Connie, Merrick, and Brent are relentless. They just continue to do everything,” MacLean said. “They want to give (their players) every edge, and they hold them to quite a standard. There are lots of expectations about what it is to be a Rebel. I love that. I think they’ve carved a really important tradition with all of the Sutter boys.

“They taught us this relentless approach. I feel really lucky to have witnessed all the Sutter boys play, right from Brian on up. I saw the six of them play and it kind of gave me an indication of what it takes. That’s why I think the Rebels have always been a little above the norm … Anybody in the game, if you want to know how to do it, just watch what the Rebels do.”

That message of persistence is something MacLean hopes to impart on his Team Cherry squad.

“The Sutters, six of them made it in and I think of one word – ‘relentless’. Just be relentless,” MacLean said. “I met a very like-minded individual when I met Don, knowing you have to be exacting and you can’t take anything for granted. You can never be satisfied.

“You cannot get to the NHL and think ‘Oh good, I made it.’ What are you going to do when you get there? Don is all about that. I’ll certainly express my appreciation for how he is that way and that’s why he’s successful.”