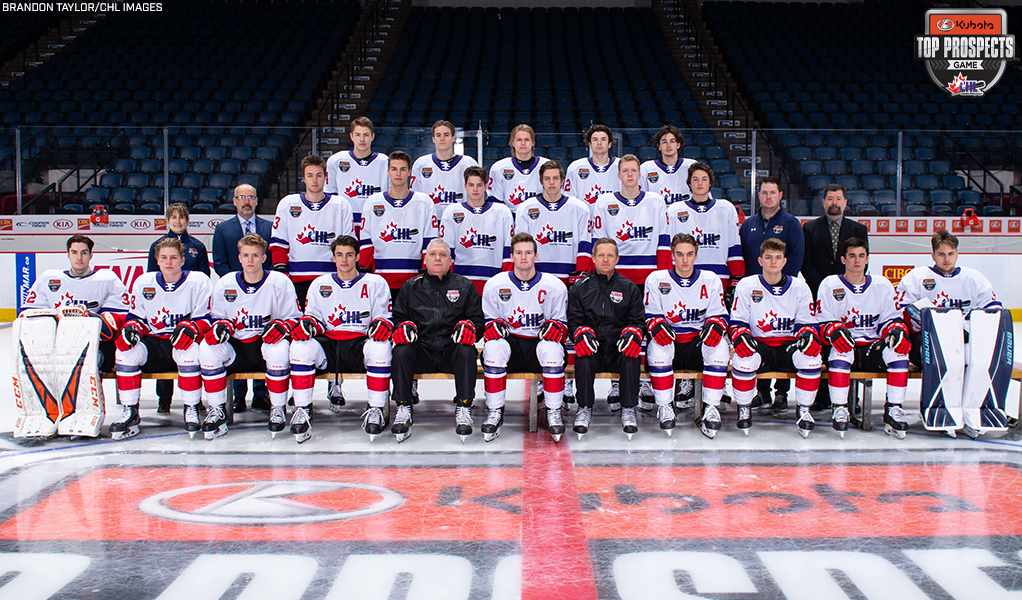 NHL CENTRAL SCOUTING SAYS: Very smart and skilled – good pro size with good quickness and athleticism – he is smart at reading and reacting to situations – he’s technically very sound – very good feet – he’s got efficient and quick lateral ability – he challenges the shooters well with very good net coverage and angle play – he’s quick to flare out his pads to protect the low corners – he also recovers quickly back to his feet – great instincts – he’s calm and relaxed and plays with a positive swagger – great strength holding his ground in tight situations – he’s got very good NHL potential.

NHL CENTRAL SCOUTING SAYS: Plays a high pace game which enables him to be effective in all areas of the ice – A physical presence at both ends of the rink – displays good hockey sense and awareness – can play a solid containment game – closes gap as well as any D man in the league – tough to play against – shows excellent speed and mobility – 1st overall pick in the 2017 draft – is brother of Brendan of the Buffalo Sabres – won the top defenseman award in the Bantam and Midget years – played in the 2019 Memorial Cup tournament – member of Team Canada at the 2019 Hlinka/Gretzky U-18 tournament.

NHL CENTRAL SCOUTING SAYS: Captain of the Soo Greyhounds – Logs plenty of minutes in all situations – Strong skater with good mobility all ways – Good escapes and quick moves under pressure and then advances puck – Crisp passer that surveys and makes the right play up ice – Good activation to get up ice and join the rush – Can drive the play up ice and gain zones or join at the right times – Great mobility along the line and can get a heavy well timed shot through to the net – Good gap and holds the line and reads the play to step up and pick off passes – Hard on pucks in zone and stays with his man – Excellent compete level and is hard to play against – Two-way defender with offensive upside and strong defending – Member of Team Canada at the 2019 Hlinka/Gretzky U-18 tournament.

NHL CENTRAL SCOUTING SAYS: A big D man who is a strong skater and moves well for his size – will join the rush, or can carry the puck out of trouble – will step up in all three zones to make a hit, yet can still use his size to be more effective – used on both the powerplay and penalty kill units – looks to have the ability to reach another level – played for Hockey Canada (White) at the 2018 World Under 17 – Selected in the 1st round, 7th overall in the 2017 WHL Bantam Draft by the Calgary Hitman.

NHL CENTRAL SCOUTING SAYS: Good quickness and agility -finishes checks with authority in all areas of the ice – good decision making on both offense and defense – tough to play against in all areas – Creates offenses chances – points don’t indicate his value to his hockey club – plays on both the powerplay and P.K. units – has a different gear when need be – Captain Canada White at the 2017 World Under-17 Hockey challenge – won a gold medal at the 2018 Hlinka Gretzky Cup – played for the 2019 Under -18-World Championship – 1st round pick, 12th overall in the 2017 draft.

NHL CENTRAL SCOUTING SAYS: Smart two way defender that has offensive upside – among the league leaders for rookie scoring by defenseman – plays top pair minutes in all situations as a first year player – very good mobility, and closes out the opposition very well – smart puck mover that sees the ice well and can pick apart the forecheck – good skater that is strong on his skates and difficult to knock off the puck – played for Team Finland in the 2019 Hlinka Gretzky Cup.

DESCRIBES HIMSELF AS: Two-Way, Mobile, Puck-Mover

NHL CENTRAL SCOUTING SAYS: Very good skater that is hard and direct on plays – Quick feet and very good mobility and is quick to join the play up ice – Moves the puck well and finds the right support to advance play from his own zone – Heads up game with the puck and can execute passes in all zones – Works the offensive zone blueline well and gets off a quick release shot from the point – Good choices when to pinch and is effective keeping plays alive and maintaining zone time – Activates in the o-zone at the right times with a purpose and has goal scoring ability in tight – Good positional defender that doesn’t make a lot of mistakes – Good recovery gear to get back quickly on plays – Plays a calm and steady positional game – Quick to retrieve pucks – Strong compete level – Steady two-way defenceman.

NHL CENTRAL SCOUTING SAYS: Skilled forward who processes the game well – excellent puck skills and vision – carries the puck well and dishes it out to open teammates; unselfish game – smart offensive instincts to recognize openings and quick to generate offensive opportunities – deceptive speed and quickness – good compete level and is a key player for Shawinigan; plays all situations – responsible game with and without the puck – played for Team Canada at the Hlinka-Gretzky tournament.

NHL CENTRAL SCOUTING SAYS: Powerful wide stride skater that can pick up a head of steam and fly – Heads up game advancing the puck, always moving the play up ice – Passes like a pro with crisp on the tape or confident saucer passes – Good playmaking ability and vision to find open men for scoring chances and processes plays quick – Good puck control on the fly and showed he can gain zones with ease and make plays at top speed – Has a hard shot and is a scoring threat – Great net front presence – Pro style power forward type potential.

NHL CENTRAL SCOUTING SAYS: Powerful smooth skater with good speed – Scoring threat with a heavy shot and quick release – Has very good hands and can toe drag the puck around opposition and get shots off or create space for himself – Heavy on the body and pursuit on pucks with the ability to win puck battles – Very strong puck protection and wall play allow him to make quick power moves down low attacking the net – Excellent net front presence and has the ability to get his stick on almost any shot from the point towards the net – Good vision and playmaking ability – Aware in the D-zone and as a winger he is comfortable as first man back playing down low – Pro style power forward type potential – Member of Team Canada at the Hlinka/Gretzky U-18 tournament.

NHL CENTRAL SCOUTING SAYS: Gifted offensive player who displays excellent vision delivering pucks to teammates in good scoring positions with crisp, accurate and often high difficulty passes. Displays a high hockey IQ by consistently putting himself in the right areas of the ice to get scoring chances. Has an excellent shot with a quick release with and the ability to score from multiple angles in the offensive zone. Soft set of hands and he confidently controls the puck moving with speed or stickhandling and making plays through traffic. A dangerous player with and without the puck who also excels on the power play.

NHL CENTRAL SCOUTING SAYS: Great skater who displays speed and good acceleration carrying the puck – shifty and very agile on his skates; changes direction quickly and makes plays at high speed – good play maker – competes hard in all three zones; hard forechecker and gets to the tough areas – generates lots of offense and logs lots of minutes for Cape Breton – has a scoring touch around the net and has a deceiving wrist shot – good all-around player.

NHL CENTRAL SCOUTING SAYS: Solid and a strong skater – possesses breakaway speed – shows poise under battle for possession, using line mates well – can be a pest at times with his agitating style of game – displays good hockey sense and awareness – used on both the point and forward on the powerplay – very good vision – solid at both ends of the rink – intelligence play both with and without the puck – Brandon’s 1st pick 8th overall in the 2017 draft.

NHL CENTRAL SCOUTING SAYS: Exceptionally smart player with top end speed and pull away gear – great at carrying the puck and leading rushes – executes under pressure and has great vision and anticipation – very good quickness with the puck and exceptional ability to change speed – high end puck skills and vision to create plays in offensive zone – offensive and scoring threat every shift – impressive compete level every time he’s on the ice – played for Team Canada at the 2019 and 2020 World Junior Championships.

NHL CENTRAL SCOUTING SAYS: Excellent puck handler – Puck skills, vision and execution are on another level – Excellent puck control and elusiveness – Can turn on a dime eluding checks giving himself time and space to utilize his offensive arsenal – Has incredible hockey IQ and feel for the game – Confident with the puck attacking offensively with head fakes and stick fakes walking through players at will – Can slow the play down to his pace drawing the attention of every defender and finds a pass no one else in the arena sees coming – Offensive dynamo who works smart and hard with and without the puck – A major threat every time he is on the ice and is just as dangerous as a scoring or playmaking threat – Member of Team Canada at the Hlinka/Gretzky U-18 tournament.

NHL CENTRAL SCOUTING SAYS: Very good puck skills and ability to find the open space – good skater that uses his quickness to generate offence – very good shot and ability to finish when given the opportunity – smart and patient with the puck in the offensive zone – sees the ice well and is a very good player below the dots cycling the puck and making plays – played for Team Russia at the 2019 Hlinka-Gretzky tournament and the 2019 World Junior A Challenge.

NHL CENTRAL SCOUTING SAYS: Versatile forward that can play wing or centre – Very good skater with a strong powerful stride – Plays a relentless game and feet are always moving – Hard working and responsible at both ends of the ice – Very good hockey sense and habits – Strong puck distribution and very good playmaking ability – Very good smarts and awareness without the puck and has a good feel for the play – Very hard on the backcheck and breaks up a lot of plays off the rush – Good compete level and is involved in the play on every shift – Extremely polished two-way forward with excellent upside and pro potential – Member of Team Czech Republic World Junior U-20 Team.

NHL CENTRAL SCOUTING SAYS: Among the WHL leaders in points – played for Team West in the Canada/Russia series – invited to Team Canada try out for the World Junior Championships – smart, two way center that is good in all zones – can contribute offensively as he has shown this year, and is also a key defensive player for the Blazers – very good play making ability along with a scoring touch – poised puck decisions and has the patience to make the right play.