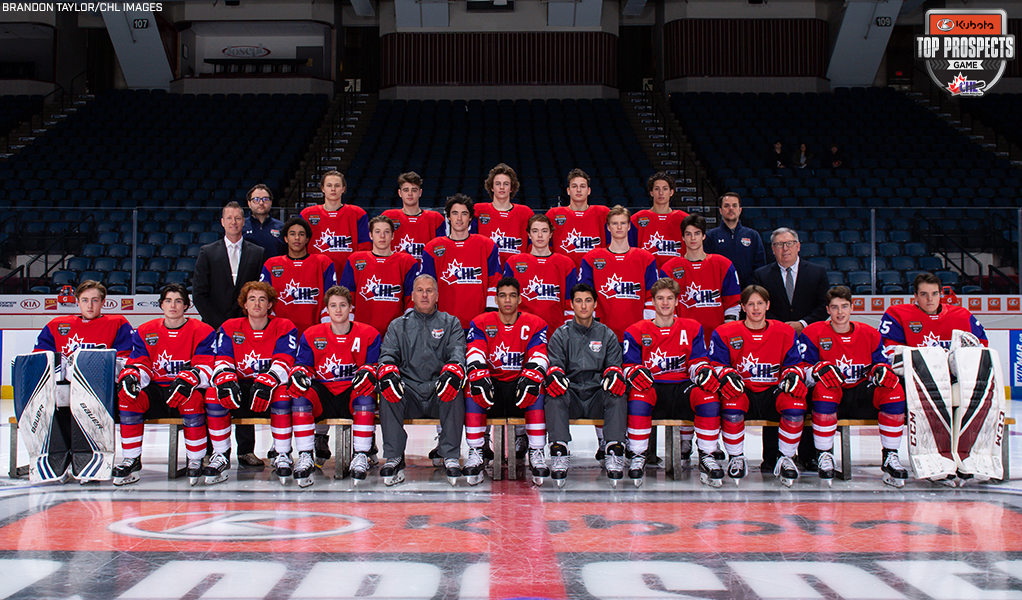 NHL CENTRAL SCOUTING SAYS: Has a huge presence in the net – very good net coverage – challenges the shooters to at least the top of the paint on initial shots – properly positioned so that he doesn’t leave much room for shooters – has a well-balanced strong stance – good compete – good scramble ability to get back in position and to compete for a loose puck in the crease – a big goalie that has good quickness and athleticism – good job of tracking pucks through traffic – good NHL potential.

NHL CENTRAL SCOUTING SAYS: Has had an impressive first half of the season – his positional play has been exceptional ( he plays big in all situations including when he’s down in the butterfly) – he’s very calm and cool in all situations – never gets flustered – very smart at reading and reacting to the plays – always seem to be a step ahead – excellent overall rebound control on the high and low shots – he’s one of the best at playing the puck from behind his net – good solid strength and good reaction quickness – very strong to recover back to his feet – excellent NHL potential – member of Team Canada at 2020 World Junior Championships.

NHL CENTRAL SCOUTING SAYS: Skilled, mobile defenseman that skates very well – moves the puck quick and with authority – good vision, processes the game well and poised with the puck – smart puck game finding open options on zone exits – defends very well, takes time and space away and is quick to transition the puck. He can also shoot the puck very well and is a scoring threat from the back end – plays all game situations for Charlottetown – played for Team Canada at the 2019 Hlinka Gretzky Cup.

NHL CENTRAL SCOUTING SAYS: Excellent skater (speed, mobility, agility) – Can drive the play and push the pace from the backend – Excellent transition player and can make tape to tape passes on the fly – High-end offensive game and playmaking ability make him dangerous every time he touches the puck in the o-zone – Effortless skater and his first few powerful strides to pull away is unmatched – Good use of head and body fakes to evade pressure – Shows the ability to lead the play up ice and gain offensive zone time for his team or joining the attack as the late guy making him a threat off the rush – He is so calm and slick with the puck and surveys the ice making smart decisions – Works the offensive blue line so well and his mobility puts himself in positions to get his quick release shot off towards the net – Two-Way player with excellent offensive ability and is hard to beat with an excellent stick and intelligent positioning and angles defending – Played for Team Canada at the 2019 Hlinka/Gretzky tournament – Member of Team Canada World Junior U-20 Team.

DESCRIBES HIMSELF AS: Skilled, Competitive, Hardworking, Coachable, Desire to Win

NHL CENTRAL SCOUTING SAYS: Solid two-way defenseman that brings a good puck game and a physical element – good size and uses it well; defends well using his stick and body position – strong skater with good mobility & agility – hard shot from the point – plays big minutes for Drummondville in all situations; plays an important role on the power play and penalty killing unit – played for Austria at the U20 World Junior Championships.

NHL CENTRAL SCOUTING SAYS: Displays good speed when in motion – assertive when joining the rush – moves the puck well with authority – plays both the powerplay and penalty killing units – shows mobility when eluding the forecheck – at times looks like he’s still adapting to the North American game – played for Finland at the 2019 Hlinka/Gretzky tournament – was Swift Current’s 1st pick 1st overall in the 2019 CHL draft.

NHL CENTRAL SCOUTING SAYS: Is a defenseman that plays a strong two-way game. A skilled defender with a high-compete level that plays physical and is willing to battle while playing a positionally sound game. A mobile puck moving D with great vision who makes smart decisions with the puck and possess a hard-accurate shot from the point. Calm and composed with the puck and the ability to skate the puck out of trouble or advance it with smart accurate up-ice passes hitting teammates in stride. Proficient along the offensive blue-line, making well-timed pinches and jumping down to create scoring chances in the offensive zone.

NHL CENTRAL SCOUTING SAYS: Powerful skater with breakaway speed – Excellent puck possession player with superior vision, creativity and playmaking ability – Heavy shot that can overpower goalies – Physically ready for the pro game – Works hard all over the ice with relentless play and never gives up on a puck – Plays in all situations – Excellent skater that has top end power, speed and agility – Always wants the puck and attacks with shifty fakes and changes of direction blowing by defenders – A dynamic puck handler with the ability to beat guys 1 vs 1 – Controls the play and can rag the puck in zone until he finds the right opportunity to set up a teammate or rip his heavy shot – Quick hands in tight areas and can take contact and maintain puck possession and break away – Back checks hard and is responsible in the d-zone – Can take over a game at anytime – Member of Team Canada at the 2019 Hlinka/Gretzky tournament – Member of Team Canada World Junior U-20 Team.

NHL CENTRAL SCOUTING SAYS: Playmaking winger with exceptional vison who can make plays in both space and in traffic – possesses an impressive set of hands and can control the puck moving with speed or maneuver through traffic to make plays – has a hard-accurate shot with a quick release – A strong skater with good quickness and edgework. An intelligent player who shows an ability to set-up teammates for chances and also puts himself in good scoring positions – strong along the boards and is willing to crash the net for rebounds and loose pucks and is an asset on the power play.

NHL CENTRAL SCOUTING SAYS: big, two way center with a very good understanding of the game – very good details – good on draws and supporting the puck in all zones – uses his size and reach well to retrieve loose pucks – very good vision and play making ability, and is a ‘pass first’ type of player – excellent penalty killer – reads the play very well and does a good job taking away passing and shooting lanes.

NHL CENTRAL SCOUTING SAYS: Exceptional fluid skater with top end speed – High pace player that changes the speed of play when he is on the ice – Very good playmaking skills and can make plays at top speed – Excellent puck carrying/protection with end to end ability – Puck possession player that can maneuver in every area of the ice and through traffic – He has an extra quick gear and ability to make guys miss on checks and he drives by them – Strong puck pursuit game and battles to win loose pucks – Very determined with a high compete level – Creative player that always wants the puck on his stick and attacks – Member of Team Canada at the 2019 Hlinka/Gretzky tournament.

NHL CENTRAL SCOUTING SAYS: Smart and skilled forward with a strong desire to make a difference every shift – uses his speed and quickness to his advantage – very slippery; tough to contain – plays all situations and a very responsible two hundred foot game; played first power play and first penalty killing unit for Drummondville in the first half – very good hockey sense to manage the puck well – offensive threat – can finish in many ways; great shot, drives the net hard and gets to the tough areas for tips and rebounds – comes to play every night – played for Team Canada at the 2020 World Junior Championships.

NHL CENTRAL SCOUTING SAYS: Strong skater with deceptive speed – quick step in tight quarters to elude defenders- High battle disposition in his game – never gives up on a play – Not breakaway speed, but his stutter step makes him effective – Excellent vision, along with play making abilities – Used on both powerplay and P.K. units- plays with intensity – Edmonton 1st pick 4th overall in the 2017 draft.

NHL CENTRAL SCOUTING SAYS: Possess an impressive offensive skill set –a natural goal scorer with a hard-accurate shot that jumps quickly off his stick. A dangerous shooter who can score from multiple areas of the ice. An intelligent player that puts himself in good positions to get scoring chances. A strong skater with great balance and edgework who is difficult to knock off the puck. Good vison with the ability to make plays off the rush or with smart accurate passes in the offensive zone. A consistent producer on the power play that displays soft hands, excellent puck control and confidence with the puck on his stick.

NHL CENTRAL SCOUTING SAYS: Is an excellent skater that quickly gets to top speed and is an explosive puck carrier. Elusive with the puck on his stick with the ability to beat defenders 1on1 and create his own shot. Jack possesses a hard-accurate shot which he can unleash while moving with pace or quickly release in tight. High compete level, plays physical (throws some heavy hits) and is a willing battler along the boards and in the corners. He crashes the net for loose pucks and rebounds and can handle / control the puck whether moving at high speed or in traffic. He consistently contributes on both special teams’ units and plays an effective two-way game.

NHL CENTRAL SCOUTING SAYS: Is a highly skilled offensive player who is equally adept at both creating and finishing scoring chances. An excellent skater who is solid on his skates and difficult to knock off the puck. Capable to make plays off the rush or in tight areas. Demonstrates a strong cycle game; capable to extend plays in the offensive zone. Can beat defenders with speed or with an impressive set of moves. Excellent puck control whether moving at high speed or in traffic. Has a hard-accurate shot with a quick release. Works hard in all three zones and plays a physical aggressive game. Determined puck pursuit, hard on the forecheck, creates turnovers and steals. An asset on both special teams’ units and a consistent contributor to the power play.

NHL CENTRAL SCOUTING SAYS: Skilled offensive player that can score and make plays – excellent stick skill – very good at retrieving loose pucks, and winning puck battles in all zones – deceptively quick skater that wins a lot of races – smart on both sides of the puck and is an effective penalty killer – comes back hard on the back check, and reads the play well to break up scoring chances – played for Team Canada at the 2019 Hlinka/Gretzky tournament.

NHL CENTRAL SCOUTING SAYS: Is an elite skater that possesses outstanding edgework and the ability to quickly get to top speed – Excels at carrying the puck up the ice using his speed and agility to create time and space, makes creative reads off the rush and demonstrates the ability to beat defenders 1on1. Top level puck-handling skills especially in traffic. Consistently attempts and completes high difficulty plays. Shows elite level playmaking abilities and strong shot that jumps quickly off his stick. A dangerous player on the power play with top-end skill.

NHL CENTRAL SCOUTING SAYS: Strong quick skater who finds open space for scoring chances – strong pursuit of the puck – displays very good confidence when under pressure finding teammates for opportunities to score – very good vision at a high pace of game _ a quick release – shows soft hands whether setting up, or for scoring chances – plays with a chip on his shoulder, and a solid 200 foot game – used in all situations – plays with energy – Assistant Captain for Team Canada (Black) at the 2018 U-17 World Challenge – played in the 2019 Memorial Cup tournament – Brothers Orca plays with Calgary Hitmen (WHL) and Ocean plays with Portage (MJHL).