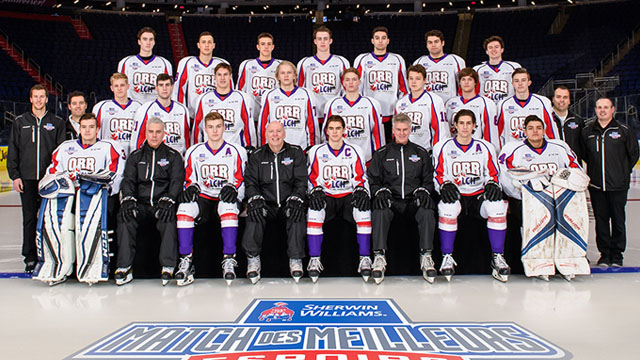 Here’s a look at their roster for tonight’s matchup.

NHL Central Scouting says: Very quick. flexible and athletic; uses those skills in most areas of his game – very assertive style of play  – has explosive leg drive to be effective when reacting to shots or recovering for a rebound – excellent work ethic ( a never give up attitude ) – possesses “cat like” quickness with his glove hand – very strong stance and plays the top of the crease setting square to the shots – plays very low in his crouch and tracks the puck well – excellent lateral quickness; very quick and efficient post to post play to prevent the wraparound attempt –  stands out with his athleticism, high end skills and desire.

NHL Central Scouting says: At 6’6” he is a rare breed because he is such a multidimensional hockey player – can quarterback the power play; his one timer is heavy and accurate – very good hands and puck moving game for a defenseman; solid game at offensive blue line – composed under pressure, doesn’t panic with the puck and makes good decisions with the puck in all zones –  moves very well for his size – has excellent reach & stick to puck technique which makes it difficult for forwards to beat him wide or one on one – good understanding of positional play – solid two way game.

NHL Central Scouting says: Poised defender who plays effectively in all zones – plays a strong positional game utilizing a good stick and body position to eliminate opposing players from the play – possesses a physical element to his game and is concentrated on making opposing forwards earn each and every opportunity – makes efficient plays under pressure and is able to drive possession by executing smart passes advancing the puck.

NHL Central Scouting says: Gifted fluid skater who is able to control the play with his mobility and puck skills – possesses good offensive instincts and ability to join the attack making him very difficult to neutralize – good ability to utilize skating ability to limit time and space of opponents as well as having good strength to separate his man from the puck – capable wo-way defender who has the skill and attributes to impact in all three zones.

Rasanen describes himself as: Patient, creative, hard to play against, aggressive, offensive

NHL Central Scouting says: Big and strong defenseman who uses his size and reach effectively to make himself hard to play against – an effective physical presence who looks to eliminate his opponents at every opportunity – demonstrates a powerful shot from the point making him an asset to his team’s power-play – very good first pass instincts enabling him to transition the puck quickly and start his teams attack – effective skill-set allows him to play and be trusted in every situation.

NHL Central Scouting says: Highly intelligent defender with good vision and offensive instincts – reads the play extremely well – passing ability allows him to be constant threat in his team’s transition game – very poised under pressure and quick to process the game and capable to make the high percentage plays while being checked – has the ability to run the power-play and demonstrates the skill to get his hard, accurate, shot through from the point with consistency.

NHL Central Scouting says: Highly gifted center with deceptive offensive ability and instincts – possesses high-end puck skills and very quick and clever in one on one situations – displays good vision with the puck and is able to execute skilled plays in traffic – high hockey IQ and ability to anticipate the play make him a central figure in his team’s offensive attack.

NHL Central Scouting says: First year player in the OHL with excellent NHL speed & quickness – combination of size, speed & skill make him a dangerous offensive threat – his speed can be a difference maker on the play which defenders learn to respect – brings a consistent work ethic and plays a strong puck pursuit game – competes consistently & effectively with his skills and assets in all situations to earn extra ice time.

NHL Central Scouting says: Elite prospect with excellent hockey sense – able to make plays with speed and accuracy – top five in goal scoring and points as a first year player in the QMJHL – complete player that competes at both ends of the rink – excels at finding open teammates and creating open ice for himself – excellent vision and playmaking skills as well as ability to score – strong puck possession game & competitive game to be a difference maker every time he’s on the ice.

Lind describes himself as: Goal-scorer, responsible

NHL Central Scouting says: Very good offensive player with game breaker ability – strong skater with an extra gear to quickly pull away on the play – leads his team in goals, assists and game winning goals – very good offensive instincts to be open on the play – NHL shot with an quick release – power play specialist as a precise passer with excellent vision and timing to generate scoring chances.

NHL Central Scouting says: Displays a strong two way game – can play a physical game finishing checks with authority causing turnovers and a finesse game with quick offensive instincts to generate scoring chances – strong skater with a good burst of speed driving to the net and getting to pucks first – displays good play making and finishing abilities –leads his team in power plays goals – developing a strong leadership style and is a reliable ‘go to’ player on his club this season.

NHL Central Scouting says: Good package of size, skills and smarts – excellent vision with hockey sense to support teammates and make good choices on the play – utilized in all situations and plays the point on the power play at times – unselfish game with the puck – responsible to play a solid two way game – vision and thought process often a step ahead of teammates – competes with his skills and assets – doesn’t like to lose a battle in any situations and plays to win.

NHL Central Scouting says: Excellent combination of size and skill – can play a power forward type of game using his size and strength to advantage – moves well for a big man and is effective at always being on top of the play – excellent play making ability recognizing opportunity and setting up in offensive zone –  possesses a natural goal scorer’s touch and can score in a variety of ways -smart game with and without the puck; always an option for his teammates – among the league leaders in goals and power play goals.

NHL Central Scouting says: Very intelligent two-way player who reads the ice quickly – capable of playing multiple positions and all situations – utilizing his size and skating ability to have an impact in all three zones – very poised with puck possession game and is able to make plays at top speed – very good awareness away from the puck and demonstrates a capacity for finding open areas in the offensive zone – NHL shot asset and shoot with authority.

NHL Central Scouting says: Strong power offensive game with a natural scorer’s touch and finishing ability – great hands and shot which he gets away quickly and with authority – leads his team in goals scoring and points – Outscored both older brothers in his OHL rookie season – strong game down low in puck battles and in one on one play – one of the best in this Draft class in puck protection – size and skill assets make it tough for opponents to check him – smart offensive instincts to always get himself in the right spot at the right time and always is a scoring threat.

NHL Central Scouting says: Dynamic undersized offensive player with exceptional speed and quickness – leads his team in goals, assists and game winning goals – leading scorer on his team last year as an underage by almost 20 points – excellent vision and play making ability and able to make the plays at top speed – smart competing with his skills and assets and consistently produce offense – Spokane, WA  native who plays alongside his older brother (Keanu) and was taught to skate by the mother of Tampa Bay Lightning forward Tyler Johnson.