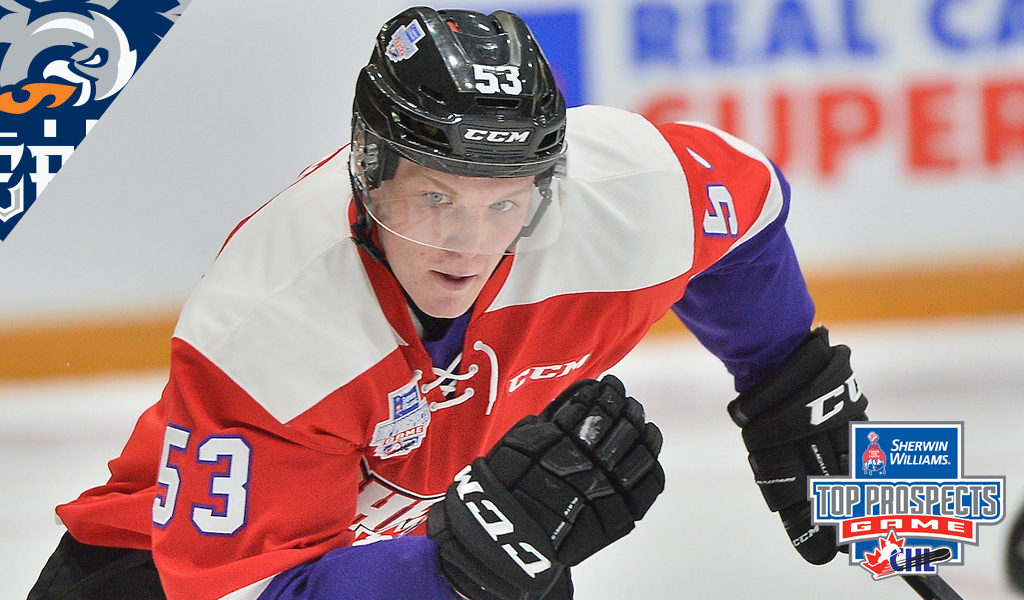 That was all Ty Dellandrea needed to claim the record for the two fastest goals scored at the 2018 Sherwin-Williams CHL/NHL Top Prospects Game, as the Flint Firebirds forward pocketed a pair of tallies at the 16:22 and 16:42 marks of the opening frame en route to a 7-4 victory for Team Cherry.

In notching the record, Dellandrea shattered the previous high-water mark set by Val d’Or Foreurs forward J.P. Dumont, who needed 3:22 to find the back of the net twice at the 1996 Top Prospects Game.

The quick succession was all a blur to Dellandrea.

“Going through my head, I was just excited to score one goal in that game, and then I got put right back out for the next shift and scored another,” Dellandrea told the Canadian Hockey League. “I was extremely excited. (It was) definitely a special moment that I’ll remember.”

The Firebirds captain underlined how his performance paved the way for a strong second half in 2017-18. While Dellandrea collected 27 goals and 32 assists in 67 games last season, he added 24 points in the 23 games that followed that night.

“I think I was struggling a bit in the first half, trying to find my groove and get my confidence. After that game, I kind of started to take off with Flint,” Dellandrea said. “I think it gave me a boost of confidence where I felt like I deserved to be there and in this group and in this category of elite players. I went back to my home team with a bit more confidence and was able to go on a run. I think that game helped a lot looking back over how last year played out.”

Scouts certainly took notice of Dellandrea’s uptick in production. After entering the midseason contest as the 76th North American skater in NHL Central Scouting’s midterm rankings, Dellandrea’s phenomenal performance was surely a factor in climbing the draft board – he was ultimately selected 13th overall by the Dallas Stars.

Ty Dellandrea made #CHL history at the 2018 #NHLDraft as the highest player ever selected from @FlintFirebirds chosen 13th overall by @DallasStars.

“Once I had that game, maybe I was able to impress some people and, from there on, just have a good second half,” Dellandrea added. “That game helped me get my name out there and my name on the map. I think my play in the second half contributed to that.”

Dellandrea was just the second player to represent the Firebirds at a Top Prospects Game, following in the footsteps of former Flint forward Will Bitten, who competed in 2016. This year, Dellandrea’s teammate, Vladislav Kolyachonok, will take part. The Belarusian blue-liner is skating in his first season in North America, and as he aims to catch the eye of NHL scouting staffs on Jan. 23, Dellandrea’s advice is to keep it simple.

“I think everybody has a different style of game, and I went into that game with advice from a few people in my life just saying that I make sure I play my game,” Dellandrea said. “I can play aggressive and I can play hard. I played a hard game, I was hitting guys, which is part of my game. Play your game, be yourself. With all the hype around that game, don’t try to be someone you’re not.”

#SWTP Post-Game: #NHLDraft prospect @tydellandrea reflects on his record-setting performance with 2 goals in 20 seconds representing @FlintFirebirds in a 7-4 win for Team Cherry: pic.twitter.com/HjNZ8O3XVe