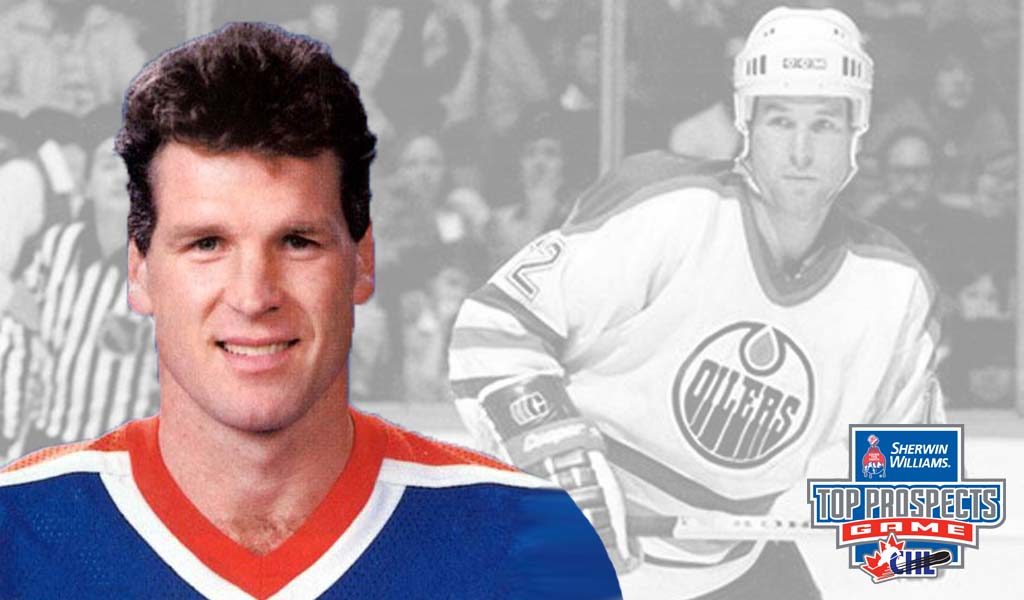 Dave Hunter knows a thing or two about winning.

So it’s no surprise that the former three-time Stanley Cup champion with the Edmonton Oilers hopes to lead Team Cherry to the winner’s circle at the 2019 Sherwin-Williams CHL/NHL Top Prospects Game, where he will be behind the bench alongside Hockey Night in Canada host Ron MacLean and fellow assistant coach Brent Sutter, the longtime bench boss of the Western Hockey League’s Red Deer Rebels.

“We want to win. Team Cherry’s got to win,” Hunter quipped to the Canadian Hockey League. “I will depend on Brent (Sutter). He’s coached all over, in the National Hockey League and in the junior ranks. I’m just a rookie, so most of the time I will just be listening to him. Ron MacLean is there too and he’s a great guy, so it’ll be a lot of fun, and I think that’s the biggest thing.”

While the prospect showcase will be Hunter’s initial entrance into the coaching ranks, he’s not completely foreign to that world either. After all, his brothers Dale and Mark, co-owners of the Ontario Hockey League’s London Knights, both have extensive stints behind the bench, and you can be sure the siblings have passed along pieces of advice to their older brother.

“They think it’s great and that I will enjoy it,” Hunter said. “I really enjoy the young players. I know these guys are going to be draft picks so it will be a lot of fun watching and working with them and seeing their development.”

A native of Petrolia, Ont., Hunter is better known to hockey fans in Western Canada, and particularly Alberta. The 61-year-old skated in 746 NHL games, spending most of his career with Oilers, where he won championships in 1984, 1985, and 1987, before seeing shorter stints with the Winnipeg Jets and Pittsburgh Penguins. Prior to joining the pro ranks, he spent three seasons with the Sudbury Wolves of the then Ontario Hockey Association.

MacLean and Hrudey at the helm on January 23 for showcase of #CHL’s top #NHLDraft prospects.

It was at that time that Hunter learned the lessons that helped him to develop into a successful forward at hockey’s highest level, guided by Sudbury head coach Jerry Toppazzini. Hunter values his time in the junior circuit and hopes to bring a similar influence and message to the 20 players who will skate with Team Cherry at the prospect showcase.

“I think a lot of times you forget when you leave junior and move on to the NHL, but I always look back at great experiences in Sudbury,” Hunter said. “Sudbury was a great place to play junior hockey. The fans were always supportive. I really enjoyed my time with the Wolves.”

Of course, that won’t be the only message Hunter plans to impart on his squad.

“As we used to say in the old days, just come and play your game and do your best, and you’ll enjoy it,” Hunter said. “I think a lot of times, everybody comes in and they get a little bit uptight, but you just have to go out and play your game. That’s how you got there.”

As he did in Sudbury, Hunter is sure to see similar fan support when he arrives in Red Deer, Alta., the event’s host city. This year marks the fifth time since 1999 that the game has headed to Alberta and the first time it will be held in the Rebels’ home rink.

“It will be great to come to Red Deer. The fans will be supportive. They love their hockey,” Hunter said. “Brent and the Sutter family have done a great job in Red Deer, and Alberta overall is great with the Hitmen and the Oil Kings and junior hockey.”