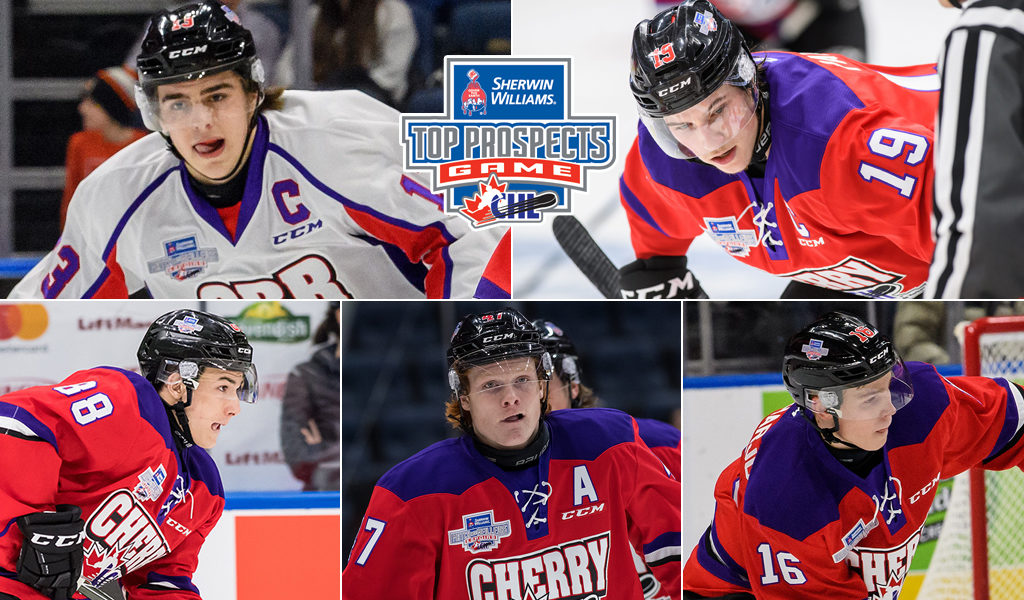 Forty of the CHL’s top draft eligible prospects descend on Guelph next week looking to leave an impression on the hundreds of NHL scouts and GM’s sure to be in attendance at the Sleeman Centre.

The cream rose to the top last year in Quebec City, with eventual first overall NHL selection Nico Hischier (Halifax Mooseheads) of Team Orr putting on an impressive performance with a goal and two assists despite his team’s 7-5 defeat.

While the New Jersey Devils are reaping the benefits of adding a Swiss star in Hischier this season, eventual second overall pick Nolan Patrick (Brandon Wheat Kings), now of the Philadelphia Flyers, got involved too. Patrick had a pair of assists and won 12 of 16 faceoffs, helping guide Team Cherry to its first win in six years at the event.

The two NHL rookies squared off for the first time since their Quebec City clash in New Jersey on Saturday with Patrick’s Flyers taking a 5-3 win.

“I know him pretty good, I actually talked with him today,” Patrick told John Boruk of NBC Sports, adding that he catches up with Hischier over the phone about once a month. “He’s a really good guy and a good player. It was really cool to meet a lot of those guys through that experience.”

Team Cherry coach Simon Gagne came away impressed by young stars in Hischier and Patrick, citing their readiness for new challenges at the next level.

“It’s impressive to see the skills and how fast and strong they are with the puck,” he told NHL.com’s Mike Morreale post-game. “When I played, my shot was good enough for junior hockey and now these guys got an NHL shot right away; it’s very impressive.

“I like to compare the NHL with the NFL in that now you’re drafting a player who can become a big impact on your team right away, for next season.”

While the two big ticket names from last year’s event are figuring out life in the National Hockey League, a few other top performers are thriving in the CHL ranks.

Portland Winterhawks defenceman Henri Jokiharju vaulted himself into the spotlight with a three-assist showing for Team Orr. His record-setting performance by a defenceman put him on the Chicago Blackhawks’ radar as the Finnish blueliner was eventually chosen with the 29th overall pick, one announced by Hawks franchise cornerstones Jonathan Toews and Patrick Kane before an enthusiastic United Center crowd.

Now 18, Jokiharju is producing at over a point-per-game clip, recording 41 points (7-34–41) over 35 games as the Winterhawks are locked in a U.S. Division battle with the Everett Silvertips.

Florida Panthers prospect Owen Tippett had a goal and an assist in the Team Cherry win and got a taste of the NHL out of the gate this season. Tippett appeared in seven games with the Cats, recording his first career NHL goal in the process before returning to the Mississauga Steelheads where he has 40 points (20-20–40) in just 26 games.

Like Tippett, talented playmaker Antoine Morand had a goal and a helper for Team Cherry and is part of a successful Acadie-Bathurst Titan squad making a push for the postseason in the QMJHL’s Maritimes Division. A second round pick of the Anaheim Ducks along with Team Cherry teammate Maxime Comtois (Victoriaville Tigres), Morand has 46 points (16-30–46) in 42 games with the Titan this season.

The 23rd instalment of the annual event features Don Cherry’s squad taking on Hockey Hall of Fame inductee Eric Lindros and Team Orr on Thursday from Guelph, a game that can be seen across the country on Sportsnet.