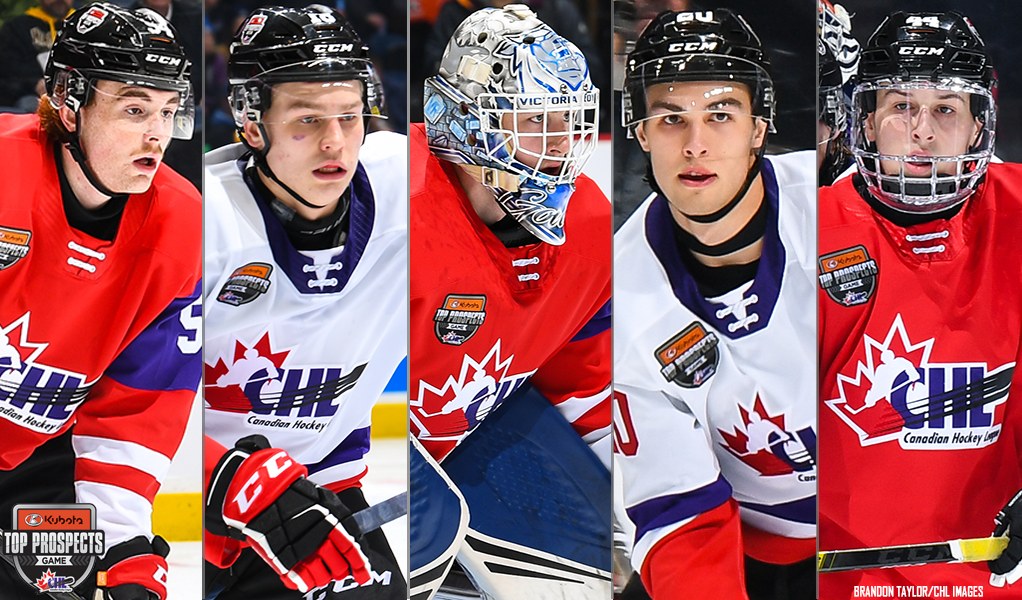 The 2020 Kubota CHL/NHL Top Prospects Game offered up a host of highlight reel plays, plenty of physicality, a handful of spectacular saves, and no shortage of storylines.

With much of the attention going to captains Alexis Lafreniere and Quinton Byfield, plus the emergence of MVP Tyson Foerster, here’s five things you may have missed from the past week in Hamilton that deserve some recognition.

A quick scan of the boxscore postgame may have been revealing for some to see that Kamloops Blazers centre Connor Zary quietly posted a three-point performance.

The 12th ranked North American skater found immediate chemistry on a line with Barrie Colts right-wing Tyson Foerster – who later claimed Player of the Game recognition for the winning Team White – the two connected three times in the middle frame, first as Foerster picked up a pair of tallies before both chipped in with assists on Schneider’s eventual game-winning goal.

“It was great. Just being able to come here this week, it was awesome and it was an honour,” said Zary, who became just the eighth player in the 25-year event history to record three or more assists. “The game was even better. I played with great linemates, Ridly Greig and Tyson Foerster. We jelled early and everything worked out perfect.”

For the first time since 2000, three rearguards lit the lamp at the Top Prospects Game as both Kaiden Guhle (Prince Albert Raiders) and Braden Schneider (Brandon Wheat Kings) scored for Team White while Jeremie Poirier (Saint John Sea Dogs) picked up one of Team Red’s three tallies. Making the feat extra special is that Schneider’s marker stood as the eventual game winner in the 5-3 final.

“I got to play with a lot of great players and great guys so coming out with the win at this event is pretty special and I think is going to be something that I remember for a long time,” Schneider said postgame. “Just to soak it all in, I’ll take it for what it is, try to learn from it, take the best from it, and take it as an experience as a whole.”

Added Poirier postgame, after leading all QMJHL skaters with two points, “I think I played a pretty good game. I was just going out there to try and have some fun and I think that’s what I did. I had a lot of fun playing all game and just enjoying the moment. I showed my offensive skill a lot, which is what I wanted to do.”

Guhle (7), Schneider (8), and Poirier (16), who all rank as projected first round candidates, put together the most productive showing from the blue line in 20 years dating back to the 2000 Top Prospects Game when all of Gerard Dicaire (Seattle Thunderbirds), Tyler Hanchuck (Brampton Battalion), Rostislav Klesla (Brampton Battalion), and Nick Schultz (Prince Albert Raiders) found the back of the net.

Gould gets the game

An unfortunate pre-game warm-up injury to Guelph Storm goaltender Nico Daws created added opportunity for newly minted Moose Jaw Warriors netminder Brock Gould who became the first at his position in event history to play the entire 60 minutes for his side.

Gould, the fourth ranked netminder in Central Scouting’s midterm list, made the most of his opportunity too, turning aside 27 shots to finish just two shy of the event record originally set by then Val-d’Or Foreurs netminder Roberto Luongo in 1997.

More than points for Coe & O’Rourke

Among the eight players to chip in offensively for Team White included North Bay Battalion right-wing Brandon Coe and Soo Greyhounds captain Ryan O’Rourke. Both ended the night with one assist but put together performances that caught the eye of at least one of the 360-plus talent evaluators in the building.

“(Coe) played a really good game tonight,” NHL Central Scouting Director Dan Marr told the Canadian Hockey League when asked about some of the game’s surprise stars. “He was finishing hits, going to the net, and making plays. He is one of the players who the scouts are trying to figure out and he helped sort himself out tonight from his play.”

Added Marr, “O’Rourke really played a strong game. He is a well-respected prospect. I think he elevated his play with his poise and presence under pressure where he is able to make plays and execute plays.”

O’Rourke, who ranks 32nd in Central Scouting’s Midterm Report, and Coe, who clocks in at 47th, will use their successful showing under the big lights to springboard into the stretch drive of the 2019-20 OHL season.

Coupled with the Top Prospects Game is the sport testing combine where a trio of players were frequently among the top performers.

Leading the way in the on-ice testing was Windsor Spitfires centre Jean-Luc Foudy who placed in the top-3 of seven of 10 categories, including first place in Reaction with Puck as well as Transition Agility and Transitional Agility with Puck, plus third place in a lone off-ice category.

Also impressing was Sudbury Wolves centre and projected second-overall selection Quinton Byfield who placed in the top-3 in three on-ice categories and twice in the off-ice column including first in the Medicine Ball Toss testing.

However perhaps the most impressive showing came courtesy of Sarnia Sting right-wing Jacob Perreault who finished among the top-3 in six on-ice categories including four first-place finishes (30-metre Forward Skate, 30-metre Forward Skate with Puck, Reaction, Weave Agility with Puck) which separates himself from his peers with his speed.

That success carried over to game time as the 17th ranked skater chipped in an assist with a pretty slap pass to Team Red Player of the Game Jack Quinn.

“It was fun. It was something I will always remember,” Perreault said postgame. “Just to see where I fit in with all those guys from all the different leagues, I thought it was something special.”