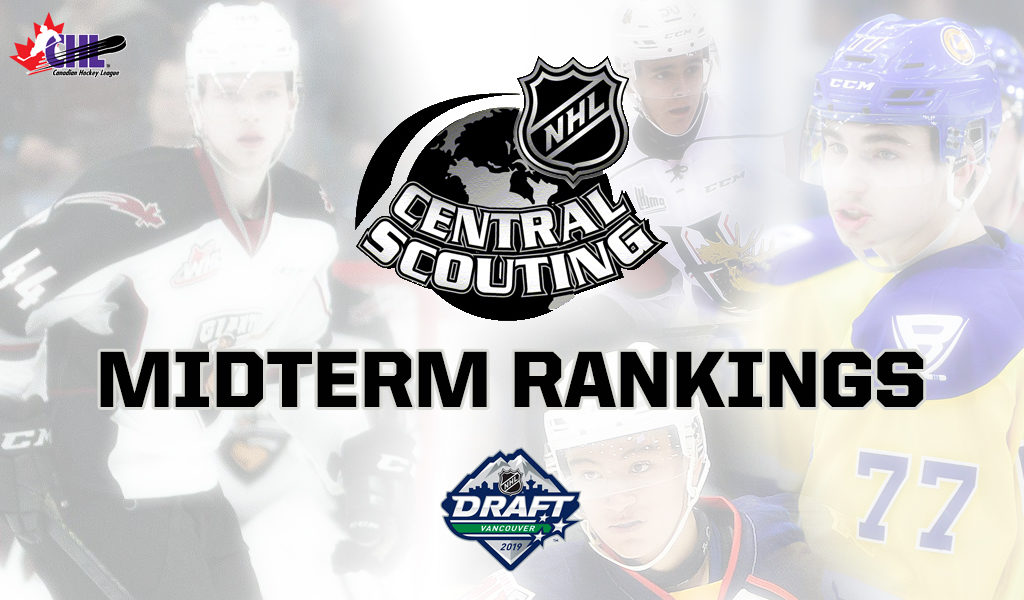 Kirby Dach of the Saskatoon Blades is the top ranked CHL skater listed at number two followed by Dylan Cozens of the Lethbridge Hurricanes at number three, and defenceman Bowen Byram of the Vancouver Giants at number four.  A total of 20 CHL skaters are listed inside the top-31 including 14 forwards and six defencemen with each of them slated to compete in this week’s Sherwin-Williams CHL/NHL Top Prospects Game in Red Deer on Wednesday January 23.

Following Dach and Cozens at forward are Peyton Krebs of the Kootenay ICE (8), Ryan Suzuki of the Barrie Colts (10), Arthur Kaliyev of the Hamilton Bulldogs (11), Raphael Lavoie of the Halifax Mooseheads (13), Brett Leason of the Prince Albert Raiders (17), Jakob Pelletier of the Moncton Wildcats (20), Jamieson Rees of the Sarnia Sting (23), Philip Tomasino of the Niagara IceDogs (24), Nolan Foote of the Kelowna Rockets (26), Samuel Poulin of the Sherbrooke Phoenix (27), Connor McMichael of the London Knights (29), and Nick Robertson of the Peterborough Petes (30).

Five CHL goaltenders are listed inside the top-10 in North America with Hunter Jones of the Peterborough Petes at number two.  Mads Sogaard of the Medicine Hat Tigers is listed third, followed by Taylor Gauthier of the Prince George Cougars at five, Trent Miner of the Vancouver Giants at six, and Colten Ellis of the Rimouski Oceanic at seven.

Last season, 140 CHL players appeared in the Midterm Rankings before 78 were selected at the 2018 NHL Draft in Dallas including 13 players chosen in the first round.